What if we had no MOON?!

What if there was no moon?

It waxes and wanes, and makes the sky new each night, dancing a 30-day orbit around the Earth. The Moon is beautiful tonight, we’ve heard ourselves say. But it’s more than a gorgeous glow-y object in the sky. It’s vital to our existence. Most likely, the moon helped facilitate complex. We’ll examine how, but first a question.

Where did it come from?  Earth. What?! You say.

That’s the prevailing theory. Obviously, not one of us was around to witness the birth of the moon, so we rely on visionary science and computer simulations to fill the blanks and give us a working theory for what might’ve occurred. While an element of imagination is at play, scientific theories are not random; rather they’re based on data, facts, and evidence we know. For instance, we know, based on sample analysis, that moon rock and ocean floor rock share a similar oxygen isotope. To scientists, this is akin to blood type; it’s a unique composition. Let’s say, if the moon were to send off a sample of itself, 23 and Me would reply with the notification that Earth is a likely first cousin, with a shared planetary DNA.

The prevailing theory for how we got our moon is known as the Giant Impact and it goes like this: A Mars-size planet, named Theia, collides with a newly-formed Earth. It’s a strike at just the right angle and just the right speed to send chucks of debris far enough into space they don’t rain back down on the earth; rather, they orbit the earth and eventually congeal to form the moon. So, it appears, the two go way back. The Earth and the moon have a history, a relationship.

And the Best Supporting Role goes to…

The moon! Its role is critical to our story. The moon STABILIZES the earth us in ways that both promote and support life. This is due, in part, to its orbit on the ecliptical plane (the same plane the earth orbits the sun) rather than the equatorial plane (which is more common). Another unique feature of the moon that gives it stabilizing power is its large size. Our moon, Luna, is not the biggest moon in the solar system but in ratio to the earth, it’s massive, roughly one-fourth the size of the earth. Other moons dwarf in size (some 1000x smaller) compared to the planets they orbit. Earth is the only planet which has a single moon, and one big enough to exert a gravitational pull that keeps us steady on our axial tilt.

The Earth’s 23.5º tilt is significant because, at that tilt, we get the seasons, which support farming and henceforth life. And the tilt, itself, is also a result of that same collision which delivered us the moon. The early formation of the solar system is thought to have been a violent time, a game of billiards, with asteroids and planets colliding. Computer simulations suggest the Giant Impact knocked the earth into a tight spin, one that resulted in a short 6-hour day, and a sharp axial tilt of maybe 70 degrees. Both corrected over time and, likely, with the help of the moon and its gravitational pull. In the end, the Big Impact was a fortuitous strike. Remember that the next time you’re derailed and sideswiped by the Theia in “your” universe. Things could turn out better than they were.

More reasons to LOVE the moon!

If there were no moon, astrophysicists say we’d wobble on our axis from 0 to 90, we’d experience erratic climates from overly tropic to excessively arctic, and we might be drawn towards other planets, possibly freezing or frying if pulled away from our special goldilocks position relative to our sun star. And one only needs to see an image of the moon’s cratered surface to presume it’s protected us from incoming asteroids, meteorites, and comets. The moon generously let that one Chicxulub asteroid slip by to kill off the dinosaurs, thusly, making our survival more possible, as many geologists and paleontologists pose. Luna is a solid cousin who’s got our back!

But wait! There’s more! The gravitational pull of the moon generates a tidal force that causes the earth and its oceans to bulge out and give us high tide. Tides carry nutrients that sustain life. They also affect climate and, therefore, our ecosystems and habits. And closely associated with the tides are the moon phases. High tide occurs during the New Moon and the Full Moon phases of the lunar calendar. Throughout history, the moon phases have guided farmers, gardeners, and festivals. For example, at the French wine harvest, growers believe that at full moon lunar influence is high and maximum energy flows to the grape, so they pick around a full moon.

How lucky are we, to end up in just the right distance from the sun, with just the right tilt, and a moon that plays a multitude of services for life to flourish. Our moon, unique in the solar system, may also be rare in the universe. 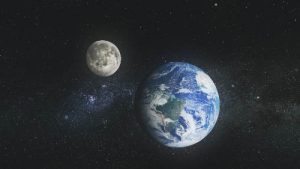 An interesting Moon fact to share at a party

We’ve all seen the different shapes and sizes of the moon, its illuminated part or whole, but have you ever noticed that some nights it’s a right-side crescent or partial moon, and other nights it’s a left-side crescent or partial moon? It’s true (if you hadn’t noticed) and it indicates the phases. That is, you don’t need a lunar calendar to have some idea, on any given night, about where we are in the lunar calendar and what phase we are headed towards. One only needs to look up to the sky (on a clear night) to make this determination because, like the seasons and so many patterns in nature, the moon follows a rhythm. It’s not random.

The Science & Superstition of a Full Moon

Must be a full moon! You’ve heard it, maybe said it.

Much of the population will attest to strange happenings around a full moon – increased traffic accidents, emergency room check-ins, homicides and erratic behavior, in general. Some have conjectured that since our bodies are made of mostly water, the tidal pull of the moon must affect us; however, the moon’s influence has less influence on the water in our bodies than the bouncing and sloshing that occurs in daily life (i.e. running, jumping, riding, etc). Further, the tidal pull of the moon is just as great during a New Moon when the moon appears absent from the sky.

It’s also been speculated that the increased brightness interferes with sleep and, so, might affect mood and behavior; but, that too has been discounted since the advent of electricity.

While there’s no solid science to confirm that a full moon causes strange behavior, neither science nor studies will rule out the possibility. Some professionals plan for it. For example, police are known to put extra officers on the streets for these key days, and many veterinarians avoid scheduling surgery during a full moon because they expect a high volume of emergency walk-ins. So, it seems, while the validity of the superstition remains a mystery, assuming so is a pragmatic and safe approach.

The Far Side of the Moon

Did you know we only see ONE side of the moon? It’s true! The moon spins but it does only a single rotation in the entire time it orbits the earth. This peculiarity is best understood with this illustration (skip to 1:09).

The side we don’t see is known as the far side of the moon. The first time human eyes saw it was the Apollo 8 mission, during man’s first full orbit of the moon. It’s interesting to note that during the Apollo 10 mission, astronauts heard “weird space music” while orbiting the far side of the moon. They never officially reported this because they didn’t think they’d be believed. The recorded conversation (skip to 3:00) amongst astronauts was released in 2008, four decades after the music was heard.

The Apollo missions have been the only time humans have stepped foot on another celestial body. July 20, 2019, marks the 50-year anniversary of man’s first step on the moon. And Vice President Pence announced plans to return astronauts to the moon by 2024. This time, it won’t be just a visit; they are planning to set up base. The moon is about to become a stepping stone for interplanetary travel.

The gravitational drag from the moon slows earth’s rotation a few milliseconds every year. At the same time, it pushes the moon away from earth at a rate of 1.5-2 inches per year. They found this in rocks during a study of the tides, and astronauts set up reflectors on the moon to measure the speed at which the moon is receding.

With the moon moving farther away, the cosmic coincidence of an eclipse will one day be a thing of the past. According to NASA, when the moon’s mean distance from Earth has increased an additional 14, 600 miles, it will be too far away to completely cover the sun. But don’t worry, there’s no need to reach for the Kleenex just yet. It won’t happen for another 600 million years.