Most of us were distracted with innovative technology on Earth, in 2005, new discoveries at our fingertips. We were likely in search of a new ring tone for our Motorola Razor flip phone the day the news broke about humanity’s MOST DISTANT LANDING. And it remains just that, at the publication of this post, the farthest we’ve landed.

1.5 billion kilometers from Earth, a hazy-orange moon called Titan orbits Saturn, the second-largest gas giant in our outer solar system. Titan is one of Saturn’s 53 confirmed moons (there are an additional nine unconfirmed as of 2019). How far is 1.5 billion kilometers? It’s easier to think of it in terms of time. Consider this. Traveling at 11 miles per second, it took almost SEVEN years for us to reach Titan. Compare that to a trip to our own moon, a jaunty 3 days away, and you get an idea for the sweep of this mission.

According to NASA, Titan is one of the most Earth-like worlds we’ve known. It’s the only known world (other than earth) to have clouds and a dense planet-like atmosphere. Voyager I was the first to fly by and get a glimpse of Titan in November 1980 and Voyager II made a second pass of the moon in August of 1981. Titan’s surface was unobservable because of the dense haze of hydrocarbon. Data suggests most of the atmosphere is made of Nitrogen, like Earth. Could there be life? Exploration was needed.

The Cassini-Huygen space research mission launched on October 15, 1997. It was a joint endeavor between NASA, the European Space Station (ESA), and the Italian Space Station (ISA). Huygen, an ESA-built probe, piggy-backed onto Cassini, a NASA-built spacecraft. The two separated in December of 2004, with Huygen landing on Titan in January of 2005 and Cassini orbiting Saturn for the next thirteen years, gathering information about the planet and its many rings and moons. 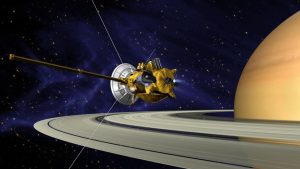 Huygen took 2.5 hours to descend. With little knowledge of what was beneath the orange haze, engineers and physicists were crossing their fingers that the 9-foot wide, 700-lb probe would land safely. And it did, through a series of parachutes. You can watch the landing here.

Images revealed a rugged mountain, ravines, and what looked to be a dry lakebed. The surface was damp with methane and the pebble rocks seen in images are actually water ice, coated in hydrocarbon. While we have water oceans on earth, Titan has lakes and rivers of methane and ethane.

Huygen gathered information for 90 minutes before its battery died and it became frozen solid. The temperature on Titan is a frigid MINUS 290 degrees Fahrenheit. This, due to its far distance from the sun and its atmospheric haze. It receives only 1% the amount of sun that Earth does. Were humans to live on Titan, we’d need warm clothing and oxygen. It might, at least, be fun to try jumping off a high spot, as the low gravity and dense atmosphere would allow you to use your coat to glide down.

Life on Titan or Elsewhere

Radio signals measured by Huygen during landing and gravity measurements made by the Cassini on its 126 flybys demonstrates there is a water ocean 35-50 miles below the icy surface, which adds Titan to a handful of habitable worlds within our solar system.

One of these other such worlds is Enceladus, another moon orbiting Titan. 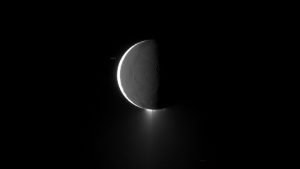 One of the most surprising discoveries of the Cassini mission was WATER ICE GEYSERS coming from the south polar region of Enceladus, indicating a global ocean. Researchers converted a recording of the plasma waves into an audio file.

The Cassini mission ended on September 15, 2017, when the spacecraft deliberately plunged into Saturn’s atmosphere, burning up like a meteor.

1.5K
Planet Earth SPACE & COSMOS
What if we had no MOON?!