We are all made of Stardust!

Not just in the Prince lyrics but in real life!

Baby, YOU are made from the dust of stars. This and other mind-bending facts about the cosmos to follow. But first the science behind your shiny existence.

By some quirk of nature, all the raw ingredients for life are created within the core of stars – oxygen, carbon, hydrogen, nitrogen, calcium, phosphorous, sulfur, sodium, chlorine, magnesium. 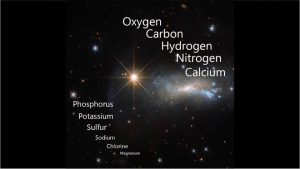 All the elements that make up our bodies, the earth, even the scone you ate this morning, are stellar – made from stars.

How did you get from the stars to here?

Stars, like us, have a cycle of life. It comes to an end. After years of massive expenditure of energy, nuclear fusion heating up its core, stars collapse on themselves and detonate into a supernova. The gigantic explosion releases gases into space, as well as all the elements that were created within. 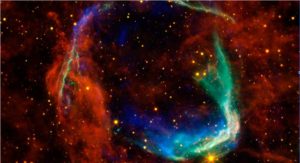 Within the supernova, then, gases coalesced. Things got really hot. And some new stars were born. You didn’t know space was so sexy!

With gravity churning and centrifugal force speeding up, some pockets pinched off to a form solar system, taking with it those elements that were floating around

Our sun is a huge glowing sphere of gas. Within the core, it’s fusing mostly hydrogen into helium. That’s how it gets its energy. It is so massive that it takes up 99.8% of our Solar System. That is, when you combine all the planets, asteroids, moons, all the things we can see, the sun makes of 99.8% of everything. And yet, it’s considered a Dwarf Star. There are at least 7 other varieties that are bigger.

The sun creates a protective bubble, known as the heliosphere, which shields our “tiny” planetary community from potentially dangerous radiation outside of our solar system. Well it’s tiny compared to the rest of the observable universe. But keep in mind, Voyager I and Voyager II traveled for 35 years and 41 years, respectively, to reach the outer edge of our solar system. And they weren’t moving at a snail’s pace! They were moving at a rate of 10.5 miles per SECOND! At that rate they still won’t reach the next closest star (still in our Milky Way Galaxy) for another 70,000 years. 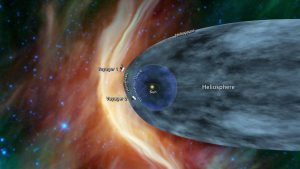 How far to the edge of the universe?

There is no edge! It’s estimated that there could be 2 Trillion Galaxies in the observable universe. There is no way of telling how much we can’t see, and we can never know because the universe is ever-expanding at a rate faster than the speed of light.

All the stars, all the planets, all the galaxies we see make up only 4% of the universe. The other 96% we can’t see nor comprehend. It’s a mysterious matter we call Dark Matter and Dark Energy. It completely eludes us, but we know it’s there because of its gravitational influence on everything we can see.

Astonishing! There is so much going on in and around that we will never perceive.