SpaceX launched its Falcon 9 with humans for the first time on May 20, 2020, marking the first of many steps towards Elon Musk’s dream of colonizing Mars. But have we already been to Mars?

Science fiction or is it a Science Fact?
Is the Government HIDING Time-travel technology? 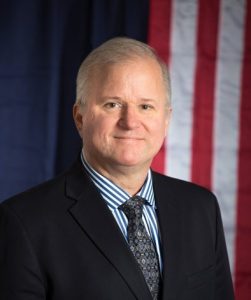 Andrew Basiago is a practicing attorney in the Seattle area. Maybe you’ve heard of him? He’s been featured on True TV and the History channel. He also ran for President in 2016 on the platform of Truth and Disclosure.

Basiago claims he was part of a secret cold-war project in which he teleported, time-traveled, and visited Mars. For more than a decade, he’s been campaigning for the US Government to declassify the program, share it with the public, and quit spending money on technology that already exists just to keep a secret.

It sounds crazy, conspiratorial! Or is it? There are, in fact, PROOFs – unclassified documents and solid investigative journalism – which reveal the Government IS capable of keeping gigantic secrets. 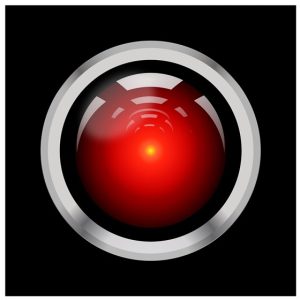 “I know you and Frank were planning to disconnect me, and that is something I cannot allow to happen.”

Authors and artists prove to be seers. Mary Shelley in her 1818 novel, Frankenstein, envisioned transplants. And Jonathan Swift foreshadowed the discovery of the 2 moons of Mars in his 1726 classic, Gulliver’s Travels.

Do YOU see a smartphone in this 1860 Painting by Austrian artist Ferdinand Georg Waldmülle, entitled
“The Expected One.” 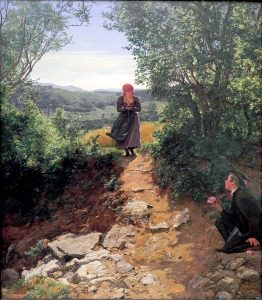 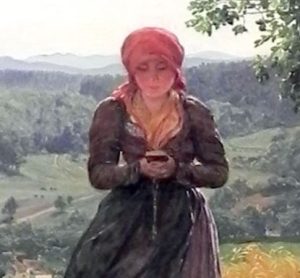 What about this 1937 mural, The Settling, painted on the Commonwealth of Massachusetts State Office Building by Italian artist, Umberto Romano. 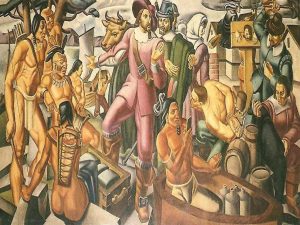 In his notebooks, Leonardo DaVinci recalls chancing upon a dark cave while hiking near Florence in 1480. Fearful of the darkness but desiring to know “whether there were any marvelous thing within,” his curiosity triumphs, and he enters. ᶦ  According to author/historian Walter Isaacson, the cave triggers dread, and in his notes, he rapidly scribes an apocalyptic scene fueled by scientific discovery and imaginative fantasy – “strands,” Isaacson states, “that would be interwoven throughout his life.”

So, it seems this was a fulcrum moment in the cave. But open yourself to other, less-scholarly sources, and it’s said that Davinci disappeared for a couple of years. Some have theorized a causal relation to his experience at the cave – that upon resurfacing, he produced some of his best work, as if the encounter in the cave provided enlightenment. Perhaps imaginative speculation, but one can wonder, how was DaVinci so ahead of his time. His thought experiments resemble scientific methodology used later. He had a remarkable grasp of geometry without any formal education, recognized patterns across interests, and was 400 hundred years ahead of his time with drawings of self-propelled cars, weaponry, and flying machines.

How do these artists see into the future? Are they time-travelers? They seem endowed with a sort of knowing.

What is a wormhole? 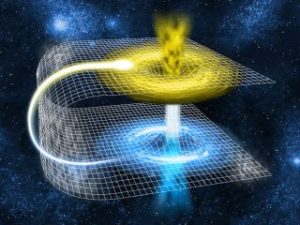 Think of it as a tunnel that connects two places in space and time. Many of Einstein’s equations include wormholes. He showed us that space and time are curved. They’re flexible. Imagine curling the fabric of spacetime to match up two far-away points so we can travel less distance – A shortcut.

While we haven’t found a wormhole, Einstein’s theories are wildly successful. When put to the test, nature always complies. He was right about Time Dilation, Black holes, and Gravitational Waves – the stretching and compression of space – which were not detected until 2015. That was after twenty-five years of looking and 99 years after the notion was proposed by Einstein. It seems plausible he might also be right about wormholes.

Tesla and his missing notes

Another genius of the era, Tesla, was also making extraordinary discoveries about the peculiar workings of the universe. Among them, Wireless transmission and Radiant Energy. At the time of his death in 1943, the US Government seized Tesla’s notes. Some of these remain classified.

Andrew Basiago claims “Tesla Time Travel Technology” was one of the eight modes of teleportation and time travel in which he participated. The technology, he says, was developed as early as the late 1960s when he traveled as a young boy – along with 140 other psychically-gifted children.

He was brought into the program by his father, Raymond Basiago, who was an engineer with the Ralph M. Parsons company, which was allegedly involved with the secret operation, known as “Project Pegasus.” Basiago claims to have made his first “jump” in 1969 at the age of six, teleporting from New Jersey to Sante Fe, New Mexico.

How does science work?

Basiago says the CIA found a way to tunnel through the fabric of time. Rather than disintegration to reintegration, which he says would kill an organism, they used a field of radiant energy to open a vortal tunnel through which the teleportee passed, body intact.

Other secret technologies referenced by Basiago include:

Basiago champions the secret program was a noble endeavor, that the motivation was to obtain details about future and past events to keep soldiers safe. Why Children? Basiago claims DARPA found adults would project their biases into simulations, while children – on the other hand – were a blank slate.  If you can travel back in time, why not fix things, prevent catastrophes like 911? Basiago says, “You can’t change the past, all you can do is fulfill an event that already happened.”  Why haven’t more of the participants (including Barack Obama) come forward? Basiago claims the CIA implemented memory loss techniques, as well as fear tactics to keep participants from revealing the secret operation.

Other accounts of teleportation technology

William Birnes, author and contributor to television shows such as on Unexplained Files and Ancient Aliens, shares an account of teleportation in his book “UFOs and The White House.” The experience, belonging to a Test Pilot, was shared with Birnes on the condition of anonymity. The Pilot alleges he was coerced into a final assignment for the CIA – the operation of an experimental “flight simulator.“ Instantly, without any sense of motion or passage of time, the pilot found himself at the other end of a large hanger in a different “flight simulator.”

If the Government does possess technology that would allow us to time-travel or teleport to Mars, then why are we spending billions of dollars on cumbersome rockets and missions to Mars? Are the reasons complicated? The ends justified?

Is the Government capable of keeping secrets as BIG as this? 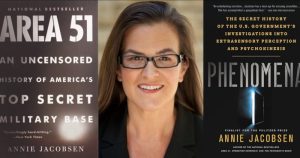 Investigative journalist and best-selling author, Annie Jacobsen, has researched government secrecy in-depth. After scouring through pages of unclassified documents and speaking with many operatives and scientists at DARPA, she contends the Government must stay ahead of other countries. During a 2017 C-Span interview, she cites the Manhattan Project as evidence that the Government can and does keep secrets. That program, which produced the first nuclear bomb, cost 2 billion dollars (28 billion today), employed 130,000 people and remained a guarded secret until strategic press releases and reports selectively informed the public.

In her book, “Operation Paperclip,” Annie Jacobsen details another secret program that brought Nazi scientists, such as Wernher Von Braun, to America in order to stay ahead of technology. 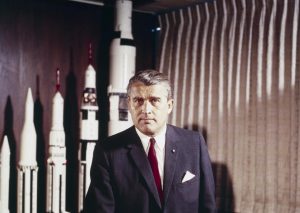 Von Braun was the chief architect of Germany’s V2 – the world’s first ballistic and guided missile. Von Braun and hundreds of other Nazi scientists worked in the shadows for decades. But Von Braun, in particular, acquired celebrity. His team launched America’s first satellite, Explorer I, and he became the director of NASA’s Marshall Space Flight Center and was responsible for the Saturn V rocket that brought us to the moon.

His status as a Major with the SS was kept secret by the US Military and NASA. In fact, according to Jacobsen, he was instructed to respond to questions about his past by saying he’d been fully investigated by the U.S. Military. “And he had been thoroughly investigated,” says Jacobsen, “They just didn’t reveal what the investigation had found.”

Regardless of his past, he was a visionary scientist with a dream of space flight. He conceptualized the idea of the International Space Station and advocated human missions to Mars. His advanced thinking and early rocket science make one wonder if he was a time traveler. In 1943 he wrote a book entitled, Project Mars: A Technical Tale, which encapsulated a journey to Mars – planning, building, and discoveries on Mars. Of them, a Mars Government whose leader was called…      ELON!

Von Braun tried eighteen times to get the science fiction book published. It wasn’t until 2006 that it was published, four years after Elon Musk founded SpaceX with the specific mission to create the technology needed to establish a city on Mars.

NASA’s Evidence of Life on Mars

NASA’s Curiosity rover found new evidence that suggests there may have been ancient life. Specifically organic molecules – indicators of life, such as carbon, hydrogen, oxygen, nitrogen and other elements – were found in sedimentary rocks near the surface. Additionally, in the Martian air, the rover detects seasonal fluctuations and high amounts of methane, a gas typically produced by living things.

“The results of finding microbes, might be as revolutionary as cracking DNA.”
– Jim Green, NASA Chief Scientist, Gravity Assist Podcast: What if We Found Life on Mars

Is all of this Science Fiction or Science Fact? Could it be there are some who know and others – in the science and in government – who seek technology already developed? The line may always be blurred. 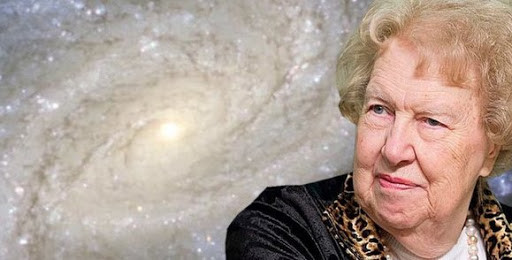 Master Hypnotist reprograms your Mind to get thru Covid 19

Please Subscribe to our channel - and we would love your comments either here or on Youtube! I am practicing …

Conspiracies in the Cosmos A second sun? A ninth planet? Cosmonauts lost in space? Murder? Welcome to 2020 and another year …