The Playful side of Space

Stories in the sky:
Legos, Disney, births & lawsuits in Space

Science can be fun! That’s what I’m finding. Maybe you’re like me and you didn’t really look forward to biology, chemistry or physics. Or maybe you were lucky to have an instructor who knew how to engage you. Space IS an exciting story and astrophysicists, theorists and scientists DO have a playful approach to it all. And if you’ve spent any time listening to some of them you’ve probably noticed they have a deep passion for the cosmos and for sharing their knowledge, which is the creative fuel behind the fun stories in the sky.

Did you know there are three LEGOs orbiting Jupiter?!

True Story! An outreach program to inspire children (and intrigue us all) to explore science and technology was the fuel that launched THREE LEGOS into space in August 2011. They arrived at Jupiter in July 2016 and will continue to orbit the planet until 2021. The Lego crew members on board the spacecraft include: The Roman God Jupiter and his wife Juno. In Greek and Roman mythology, Jupiter drew a veil of clouds around himself to hide his mischief. This is descriptive of Jupiter’s stripes and swirls which are cold, windy clouds of ammonia and water, floating in an atmosphere of hydrogen and helium. As ancient Roman mythology goes, Juno as able to peer through the clouds from Mount Olympus and observe Jupiter’s true nature. Isn’t it true? We women KNOW! LEGO Juno holds a magnifying glass to signify her search for truth.

The third Lego crew member is astronomer and physicist Galileo Galilei, who made several important discovers about planet Jupiter, including the four largest satellites of Jupiter. LEGO Galileo holds a telescope. 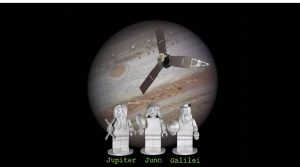 Not your standard Lego figurines, these legonauts (see what I did there?) are made of Spacecraft-grade aluminum to withstand the radiation of space. This mission is intended to improve our understanding of the solar system’s beginnings. The mission will measure Jupiter’s composition and temperature and map its magnetic and gravity fields to reveal the planet’s structure. According to NASA, the mission will give more clues as to how the giant planet formed and the influence it had in the development of our solar system.

Not to be confused with Snow White and her little friends, but an equally dramatic storyline… Pluto the planet was demoted to “Dwarf Planet” in 2006. Poor Pluto! Why? Are you having flashbacks to that fateful day in the woods when Bambi’s mom is killed by a hunter? Me too.

To understand the logic, we must understand planet criteria, as per the IAU (International Astronomical Union). In order to be considered a full-fledged planet, it must:

While smaller than our moon, Pluto meets the first two criteria; however, loses out on the third. It has not cleared its space and, instead, shares orbit with Kuiper belt objects such as the pllutinos. And, while not a planetary-determining factor, it’s interesting to note that Pluto orbits a slightly different plane (a 17◦ incline and an oval shape) than the eight planets in our solar system.

Births and Baby Blankets in Space

Nebulae, the beautiful colorful swirls, are regions of dust and gas (mostly hydrogen and helium) in space where new stars are beginning to form. For this reason, they are called “star nurseries.” Awe!!! Feels like puppies! Or kittens, depending on who you are. 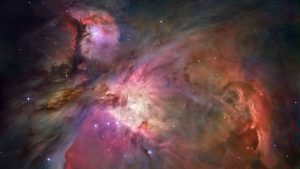 How do stars form? Gravity pulls together the clumps of dust and gas. As the clumps get bigger, their gravity gets stronger, and the clump eventually collapses from its own gravity. The collapse causes the material at the center of the cloud to heat up, and this hot core is the beginning of a star.

The RHO OPHiuchi system is one of our closest star-forming nurseries. It’s 460 light years away. That is, traveling at the speed of light, it would take 460 years to reach. The beautiful colors result from high temperature gas emitting radiation (red) or dust and gases reflecting light from a nearby star (blue). Pink objects are young stars and the cloud enveloping them is called it’s “baby blanket.”

Some nebulae have descriptive names like butterfly, horsehead, rose, cat’s eye, elephant trunk and lemon slice, to name a few; while others are more utilitarian, such as NGC6357.

APOLLO 8 was the first MANNED spacecraft to leave Earth’s orbit. This was in December 1968. You’ve probably seen the famous Earthrise photograph taken by Astronaut William Anders. This is one of many gorgeous images available to us because of science. The mission had an ironic twist because their motivation was to study the moon and yet when the three astronauts caught sight of the Earth rise they were in awe. Anders, whose job it was to photograph the moon, is quoted as saying “We came all this way to discover the moon. And what we really did discover is Earth.”

The Apollo 8 crew took turns reading the first 10 verses of the book of Genesis during a Christmas Eve television broadcast, while beaming images of the lunar surface to a billion viewers. “In the Beginning, God created the heavens and the earth…” This launched a lawsuit by atheist Madalyn Murray O’Hair, citing her first Amendment rights had been violated. The case was rejected by the U.S. Supreme Court for lack of jurisdiction.

While the lawsuit succeeded in silencing astronauts from future expression of spiritual beliefs, the United States Post Office was not deterred and issued a commemorative stamp with the iconic Earthrise photo, captioned “In the beginning, God…”

Mars is the only planet to be solely inhabited by robots. Curiosity, pictured in the header image, was the 6th rover to land on the red planet (since 2012). Designed to assess whether Mars ever had an environment able to support small microbial life, Curiosity analyzes samples it has scooped from the soil and drilled from rocks. Curiosity is a post- millennial that knows how to take SELFIES! It has beamed many selfies back to earth. And, all alone on Mars, Curiosity sang Happy Birthday to itself on August 5, 2013, commemorating its 1st birthday (the year after it landed on the planet).

Message in a Bottle

On a grand scale, we sent a message in a bottle, a time capsule, into space. Voyager I and II launched in 1977 to explore the outer solar system. Both did fly-bys of Jupiter and Saturn. Voyager I then headed for the edge of our solar system, reaching Interstellar Space in 2012, while Voyager II flew by Uranus in 1986 and Neptune in 1989. It too reached Interstellar space in November 2018. The first closest star will not be reached for another 40,000 years (at 10 miles/second).

Should the crafts meet ET along the way, both spacecrafts carry Golden LPs with sounds and images of life and culture on earth:  115 images (including our solar system), DNA, human anatomy, animals, food, architecture; sounds of nature (surf, wind, thunder, birds, whales, other animals, etc); music selections (including Beethoven) from different cultures and eras; and greetings in 55 languages. 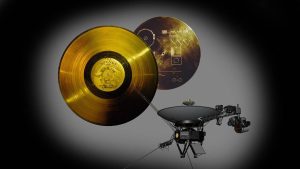 A kickstarter program makes a copy available to anyone who still owns a phonograph. There’s also a CD version for those who are undesirable of nostalgia.

We think of Earth as being our home, and it is, but we can also think of the solar system as our neighborhood, and the rest of the Universe offers all the places you may never have the chance to visit but can EXPLORE because of science.