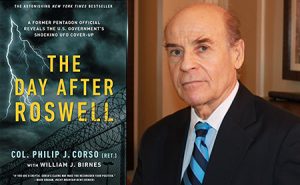 This is the last segment I do on Aliens (for a while unless something hits the new again).  Bill Birnes has so many interesting books that he has written I have had to do several journal entries just to accommodate them all.

There are many theories and beliefs that the data and technology recovered from the Alien crash of 1947 advanced the human race by 200 years.    We saw major technological advances in 3 years that should have taken much longer.

Bill Birnes researched the Roswell storyline and not only what happened by how we benefited from it.    This is a fascinating theory in how Alien technology gave us the things our military uses, and we use and take for granted every day.

Alien data, artifacts, and technology gathered from the crash lead to the following inventions.

3.  Night Vision – Bill Birnes speaks about the Night Vision that came from Adapting the lens (a black infrared contact lense) that was removed from the Eye of the Alien.  At the time of the crash in 1947, the US DID HAVE night vision but it was giant pieces mounted to the top of tanks that would allow soldiers to see during the night.        This Eye Lens from the Aliens allows the government to fast track this device to the point where it went from being mounted to the top of tanks to being worn like a pair of glasses when soldier fought in Viet Nam.  Estimated to be a 50-year advancement.

5.  Laser Cutting – a device that was cut things when it powered up.   Incidentally, there was a lab that was established at Columbia University by its University president to work with and develop “amplified energy”.   That University president was Dwight Eisenhower.   When he became president and was “read in ” about the technology of the Roswell Crash – he had it sent to this lab at his own University.   They were not told where the technology came from but was told to reverse engineer it to see if there was something that could be done with it.  Byt the 1960 the US had lasers.   This is the segment where Birnes talks about the part of the government that handles all of these classified secrets – a group called, “special access”.

6. The Integrated Circuit (transistor) – Something that the US was working on for 10 years (prior to the Roswell crash) was the Transistor, ie – they were trying to achieve digital technology.     After the crash – President Truman orders that this technology be packaged up and sent out to different military weapons manufacturers to see if there could be any benefits that could be derived.

The Integrated chip was invented in 1947 – it was a HUGE advancement – because before that the electronic components for a simple 12 dollar calculator would have taken up an entire room.
It went on to be something that transformed the radio that people would watch to something they could carry around.

Eventually, a group from Texas Instruments took this and set up show in Silicon Valley and created a scrappy little startup called INTEL!

Where are the aliens now and why won’t the government disclose?