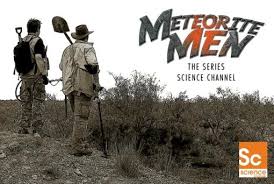 What is a meteorite? Is it a piece of cosmic rock that tumbles through space suddenly finding itself pulled into Earth’s gravity field and burning up in the atmosphere creating a beautiful blaze in the sky?
Well, yes – it’s all that except for one thing, a meteorite is not a rock but rather a piece of asteroid comprised of iron and crystal. Yes, crystal gemstones harvested from meteorites are worth much more than diamonds as they are the fifth rarest crystal on earth. So in reality meteorites are gemstones falling to the earth from space. Now imagine if you’re the one who found a 1,400-pound meteorite! Fourteen hundred pounds. Would that change your life? It did for Steve Arnold. He explains, “Four hours into my first day of hunting I found 280-pound meteorite and then two weeks later I found this one thousand four hundred thirteen pound monster and that was the day my life changed.” The moment he found this monstrous meteorite in the plains of Kansas he became an overnight icon in the world of meteorites and changed his status from meteorite hobbyist to professional meteorite hunter he was awarded his own TV series on the Science Channel called the Meteorite Men.

Steve has been fascinated and intrigued with meteorites for over 20 years it began when he came across a story of a lady in the 18080 who found a meteorite in near Greensburg Kansas when they were plowing their fields on their farm. one after another she found what she believed to be meteorites. Arnold explains,  “Farming for the first time behind mules they started running into these meteorites and she thought they were meteorites and everyone thought she was crazy. She started ordering about off her ground and her neighbors sometimes would find them and she would haul them off.  It took her five years of writing scientists and researchers all over the country before one of them finally acknowledged, yes you got meteorites, and in that, they decided to start buying them.  After enough sales of these “rocks” to institutions, they were able to pay the mortgage off on them on their farm they were able to in fact go and buy some other Farms nearby.”

Selling rocks to pay off your mortgage. Why are they worth so much? “All the meteorites that we have on earth come from the asteroid belt between Mars and Jupiter – or they come the pieces of Mars or pieces of the Moon that will blast off by comets whacking into Mars or the moon creating craters blowing pieces off that eventually make it to Earth.”

These cosmic packages are loaded with data. They contain information some of the men remain virtually unchanged since the beginning of the solar system some of them have gone through amazing amounts of changes and its a way of going back in time. It’s a way of looking into our planet because we can only go so deep.

While scientists have academic reasons for paying a hefty price other cultures to find meteorites valuable for other reasons.  Long before the civilized world reached their iron age tribes in Africa we’re using meteorites to hammer and Forge stones to create tools and weapons  This is a hundred and ten pound anvil and all across the bottom and all across the top this thing has been hammered and hammered and it came from a strewn field in Africa four thousand of meteorites were found.

Today consumers from all walks of life can enjoy meteorites for a variety of reasons one of the most popular being jewelry.  If you acquire a cosmic gemstone the technical name being peristaltic peridot you can take it to a jeweler and have them look at it and more than likely make their day because while they may have studied it and know what it is they’ve never actually seen one in their hand.  From a supply standpoint, these gemstones are inherently worth much more than regular gemstones including diamonds. This gemstone is also known as the classic peridot the August birthstone.  If you walk the streets of Eureka Springs the beautifully preserved Victorian town in Arkansas you can stop in and visit Steve Arnold’s meteorite store called Meteorites and More. In his store, he sells meteorites gemstones and Jewelry made of the space rocks.  He also runs an online business where he sells meteorites on eBay and on Facebook and here are will be meteorites except this is one of the things that’s not and it’s an impact glass from a huge crater that a melted the sand as it came in through molten glass into the air and then it cooled forming these chunks of glass that fell back down in the sand in Egypt and King Tut has in his breastplate a scarab Part out of Libyan desert glass so it is bling of kings from 3500 years ago. 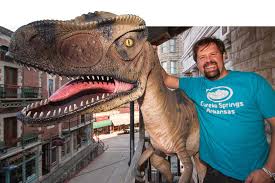 While meteorites are commonly found in the dry desert-like condition they don’t discriminate and have hit cities homes killed animals and hurt people. “Chicken little was right – the

sky is falling” the sky is falling and when meteorites come to earth – they do fall and they do hit things and there is a subculture within the meteorite collecting community that really thrives and loves to collect Hammerstones.  Meteorites that when they fall they hit something – whether it’s a car or a house or a person.  Ms. Hodges was in Sylacauga Alabama before was I believe just taking a nap hit like address her beside her which kind of slowed the rock down and then it hit her, and she ended up in this nice picture in Life Magazine kind of slightly a modest for the day of a picture of a perfect bruise on her hip all in her glory on Life magazine…