A Mermaid that Swims among Sharks!

How would you like to see a great white shark? From a boat, in the water protected by a steel cage – or just swim along side them?

Since I have been on this show – we have talked about Ghosts, and Aliens, and Government Cover ups and Archeology.

This one is the MOST HAIR RAISING FOR ME – and while I was putting it together I can’t tell you how many times the Hair on my arms stood on  end. 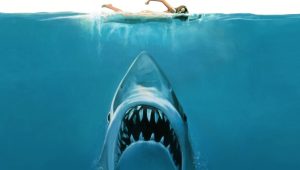 Because when I was 5 years old – I wouldn’t go in the bathtub!

I had been traumatized by a movie was one of the most financially successful films ever made.

JAWS!  – I hadn’t seen the movie – but I was still Psychologically marred.   I didn’t have to – because there were commercials  with people screaming and Roy Scheider – saying stuff like, “Get out of the water!”
“YOU GONNA NEED A BIGGER BOAT!” And then there was music!  I never saw footage of the shark – but I saw this POSTER EVERYWHERE!

I will be honest – the first time I got to swim in the ocean – it was the first things to cross my mind!

You hear how people say that Sharks are drastically misunderstood.   And that Movie – really made it so that Mankind wanted to go out and hunt and kill as many sharks as possible.

That being said – You on Youtube and do a search for shark attacks.

An apex predator, also known as an alpha predator or top 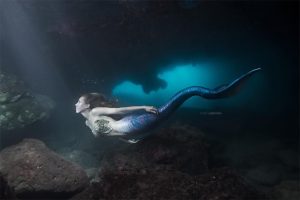 predator, is a predator at the top of a food chain, with no natural predators. – Except for maybe one predator.

Let’s look at the chart and see how many attacks and fatalities have happened since in the last 60 years.

Meet Kayleigh Burns!  30 years old and she IS A REAL MERMAID!

From what I gather – she has always had a love affair with the Sea – and She is Master Diver and big advocate for Sharks.

Kayliegh Burns works with Ocean Biologist Ocean Ramsey – and they run One Ocean Diving  the Website is https://www.freedivewithsharks.com/

They bring people out on a boat, out in the ocean, to a school of Sharks – and have the people SWIM AMONGST THE SHARKS!

Can you imagine applying for the insurance for this business – the Insurance agent would be like, “You want a liability permit to do what?  It’s Worth mentioning,   They do have a 100% safety record.

I had an amazing conversation with Kayleigh Burns – and brings tourist to swim with Sharks – and actually, the sharks in the previous videos don’t have a record of attacking people.   Topping the list of sharks that have been known to attack,  Great Whites, Bull sharks, and Tiger sharks – and here you have Kayleigh and I think her Fiance – encounter a Tiger Shark!

Now, this next video blows my mind – this is Ocean Ramsey of One Ocean diving – and this doesn’t even look real – but it is.

Sharks only are aggressive trying to eat something 5% of the time – the rest of the time they are conserving energy and they actively budget how much effort it will take to get something to eat.   They are also aware that People are not an appealing meal to them.    They like a fattier meal like a seal. 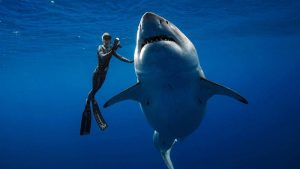 Ocean Ramsey and her partner are able to tell from a distance based on behavior if a Shark is passive or aggressive and if they feel it is appropriate – something like this is possible.    However they are Not advocating that people should try this – they are in the water with sharks EVERY DAY – for HOURS – and they are able to assess good situations from not good. 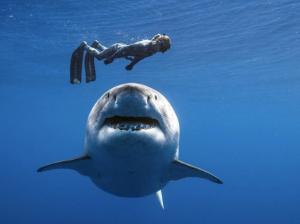 They Recently got national attention when they brought some tourists out of the water when a monstrous 22-foot great white shark ascended from the depths after feeding on a Whale Carcass.   There wasn’t a tag on this but they believe that this Grandma of all sharks is the largest and maybe the OLDEST Great White Shark on Record.

This was Kayleigh’s first time in the water with a great white and she did swim with it and was able to touch it.

She said she feels the only way it would have hurt her is if she stuck her arm in the shark’s mouth.

They are largely being killed because of Finning – where fisherman catches the sharks and cut off their fins and throw them back.   This is for Shark Fin Soup.    It is very popular to serve at Asian Weddings.   But it actually has a very nice level of Mercury in it.  They are trying to increase awareness and save conserve the Shark Population.   Currently, it is believed there are only 3500 Great White sharks left in existence.

Side note:   Conservation measures implemented to prevent the decline of great white sharks are paying off, scientists have found. The global population of great whites has been in recovery since 1990.